The Delights of Creole Cuisine An encounter with Eddy Coquin, manager and chef of Le Grain de Sel restaurant 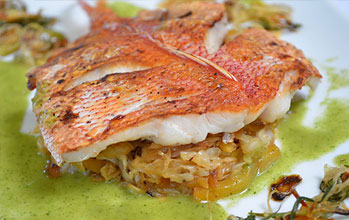 Eddy arrived on the island 30 years ago, after working at Le Méridien in Saint-Martin for 2 years. He was invited by a friend, also a cook.

He’s been in Saint-Barths since then. His many experiences have forged him and strengthened his know-how. After 6 months at La Brasserie Créole in Saint-Jean, which offers French cuisine, he worked at L’Escale, an Italian restaurant, for a year and a half, then at La Saladerie and Maya, spending 6 years in each.

Thirteen years ago, he took over the management of the restaurant Le Grain de Sel, which at the time offered brasserie-style world cuisine. Little by little, he added his personal touch and transformed the menu to meet the demands of young people on the island: eating Creole! He started offering Creole cuisine in the evening. Given the success, he extended Creole dishes to his lunch menu.

For several years now, Le Grain de Sel has been a must in Saint-Barths, especially for its delicious, tasty and fragrant Creole cuisine.

A tireless worker, Eddy is always on the move. He’s dynamic, creates, determined to advance. He inherits his know-how and taste for Creole cuisine from his Guadeloupe origins, since he was born in Marie-Galante. His experience in pig breeding gives him a good background in choosing meat.

His great pleasure: pleasing customers and satisfying their needs. Customers show appreciation. Many of them come to have a drink with him at the bar, chat in a friendly atmosphere, do not miss an opportunity to greet him when they visit the island.

An epicurean, he is attentive to details. “Everything on my menu is good. All my dishes are my favorite dishes”. Far from being discouraged by the health crisis, Eddy is learning from it. He rolls up his sleeves and sets off on a new take-out project. To be followed closely.