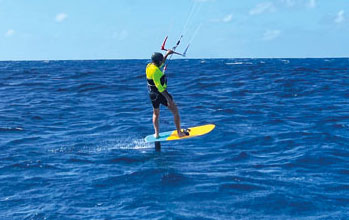 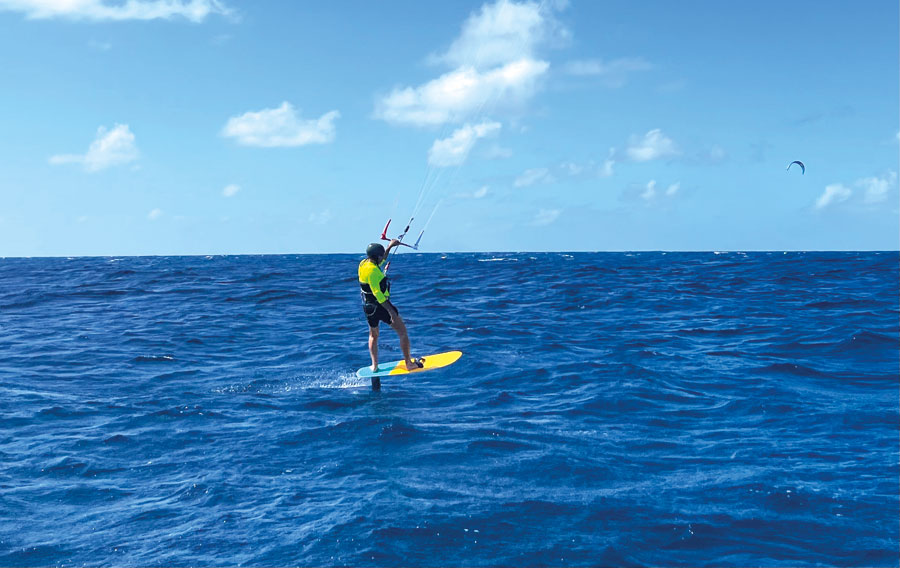 Bérénice has been fascinated by sailing since she was little. She attended her first kitesurf initiation in Brittany, France and passed her instructorship certification at 18, as a summer job. She then decided to study the sciences and techniques of physical and sports activities (SUAPS).
“My life has always evolved around sailing. It is a philosophy of life. As soon as I discovered kitesurfing, I immediately loved this new discipline. I practiced all around the world: in Australia, Fiji, Thailand. I gave sailing and kite lessons.”
Her interest in St Barts came along with its regattas, so she applied to the local club as an instructor and was hired when a position became available. Without hesitating, she moved to the island where she started to give sailing lessons.
Very quickly, in view of her commitment and appetite for regattas, she was entrusted, in addition to sailing lessons, with the organization of nautical events in St Barts, such as the Bucket Regatta or Les Voiles de St. Barth. 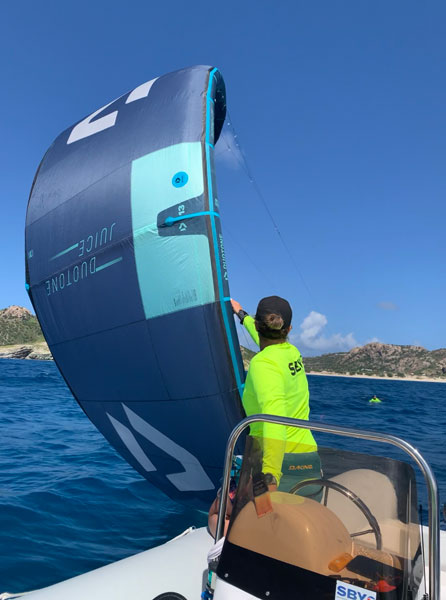 Beyond sailing, she enjoys sharing her other passion, kitesurfing, in St Barts.
With this water sport, combining a kite and a board, you can propel yourself on the water.
“Pleasure is intense in kitesurfing and so is progression. Once you have mastered the basics of the equipment and the wind, you can start building up speed and even start to jump and do all kinds of tricks. Then, riding down the waves or away from the coast is another highly motivating possibility.”
Faced with demand, whether from residents or tourists, Berenice decided to offer kite lessons in November 2021. “We have ideal conditions, a magnificent stretch of water, optimal wind conditions. I practice in the open sea, off Shell Beach. I teach how to use and control the kite on board the dinghy and then in the water, with towed swimming exercises. And finally, I teach how to stand up and get on the board. You will also have to assess the practice area, understand the wind, the currents and of course the safety procedures and the rules and rights of way on the water. After a few lessons, you can really enjoy yourself.” 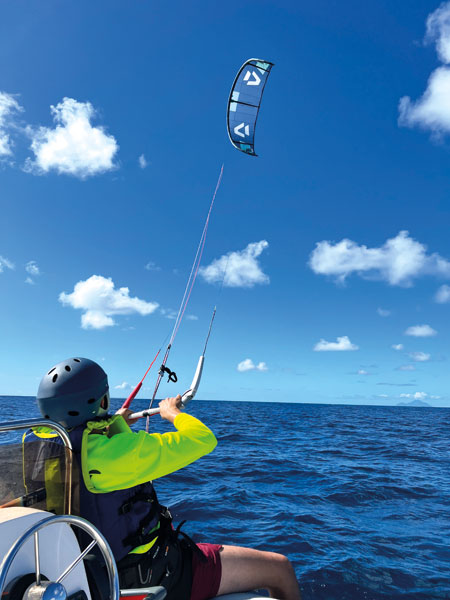 Today, about a hundred students practice kitesurfing, the youngest student being 11 years old. A true success for this new discipline in St Barts.
“My ambition is to make this sport accessible and accompany learners quickly towards autonomy. Contrary to popular belief, kitesurfing is a safe sport. You are pulled by the wind, but you only have to let go of the device to stop moving forward. Moreover, I am permanently in connection with the learner thanks to a device integrated in the helmet. “
Most beginners are completely new to board sports, water sports and sailing. “You don’t have to be a bodybuilder, nor do you have to be experienced in water sports. A kite is rather light, so there is no need to build up muscles. However, a good level of general fitness will help you progress faster and have more endurance on the water.”
Bérénice, who has co-managed the Yacht club since 2014, will know how to get you hooked on water sports and kitesurf in particular. Don’t hesitate to try, provided that you respect the steps of the learning process.

A little history
Kitesurfing has been imagined by several inventors since the 1960s.
Following a work of experimentation to improve the sail, Quimper brothers Dominique and Bruno Legaignoux registered the patent of the curved wing with inflatable structure on November 16, 1984.
In 1992, Laurent Ness (1997 French champion of parakarting) was pulled by a delta kite on a funboard at La Grande Motte. Bill and Cory Roeseler invented the Kiteski, a water ski towed by a kite, which they marketed in 1994.
The Legaignoux brothers created the company Wipikat in 1993 to market a small inflatable boat with a traction wing. They closed it in 1995 but Emmanuel Bertin tested their sails in Maui with Laird Hamilton. In February 1997, he made the front page of Wind Magazine, a windsurfing magazine with a circulation of 70,000, on the waves of Hawaii. Raphaël Salles used small funboards (boards) in 1998-1999 with Laurent Ness’s assistance, then Franz Olry made progress with twin-tip boards which democratized the practice of this sport.
The Legaignoux family launched Wipika in June 1997 to market tow bars and wings produced by NeilPryde paragliders in France, whose manufacturing was transferred in 1998 to Lam Sails, a paraglider manufacturer in China. A license was granted to Naish in 1999, to NeilPryde in 2000 then to Slingshot, Ricci and Bic with Takoon in 2003. The sales of wings went from 100 in 1997 to 500 in 1998, 2,000 in 1999, 6,000 in 2000, 15,000 in 2001, about 100,000 in 2010.
The first international championship took place in 2000, and the first French freestyle championship in 2001. There were 12,000 kitesurfers in France in 2010, 13,000 in 2011 and between 25,000 and 30,000 kitesurfers today in France.
More info on the Wikipedia site